Making your own Machine

Given our somewhat controversial results, I'm hopeful that other people will take the time and effort to make their own machine and confirm or challenge our data. This page has some short tips on how to proceed.

Don Tivar's discussion of his machine is also excellent reading; my machine is based heavily on his design: Details of Tivar's machine can be found at http://moondragon.info/wiki/The_Machine.

There are a lot of pictures of my machine on the development page. I won't repeat those here.

The Moment is Now

The most important detail for your machine is to have the same distance from the pivot point up to the target and down to the scale attachment. This is because what we're doing with the pivot arm is causing a moment (or torque). The amount of that moment is the force times the distance to the pivot. As long as the distances are the same, the two forces will be the same (the force of the strike on the target and the resisting force measured by the scale.) If the arm of the striking force is longer, the moment will be higher, and the scale (working with a shorter arm) will have to resist harder to balance the moment. It will read higher than was actually the case. If the arm of the striking force is shorter then the scale will read lower than was actually the case. This is why we ignored any results that were visually high or low of the center screw.

On my machine, the pivot arm was 17" from the scale screw to the center of the target, or 8.5" on each side. Tivar used 8". Use whatever you want, but just make it the same on each side. 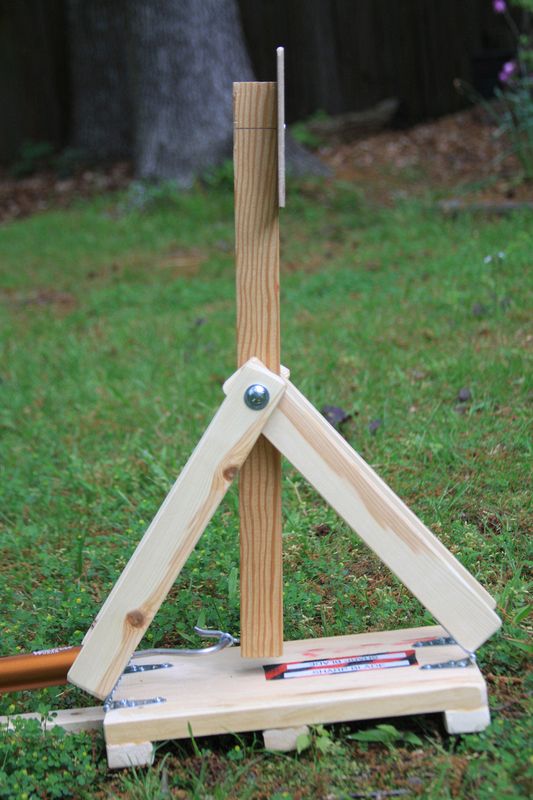 Side view of the Mark IV pivot arm

How much error could we get? If we somehow got a clean strike on the 5"x5" target edge 2.5" vertically higher than my center, the moment would be force_sword times 11 inches and the scale would be match that moment with force_scale times 8.5 inches. So, it would read 29% too high (force_scale would be 1.29 times force_sword). We disregarded any strike where we could tell that we were off vertically by more than an inch (12% max error). Hopefully, throwing 3 shots times 2 fencers averaged out this error to near zero. For the Mark V model we painted a 1" horizontal stripe across the center of the target and only counted shots that made contact with the stripe.

Here is a link to the current scale that I'm using via Amazon. You could certainly use anything you can mount and that will record the momentary force of a strike for you to read later.

My machines have included hinges to allow the machine to be collapsed into a more transportable configuration. These are not needed for the functionality of the machine. On the wooden models of my machine (Marks I-IV) they proved to be a concern. The hinges on the Mark V model have, thus far, proved to be made of sterner stuff. 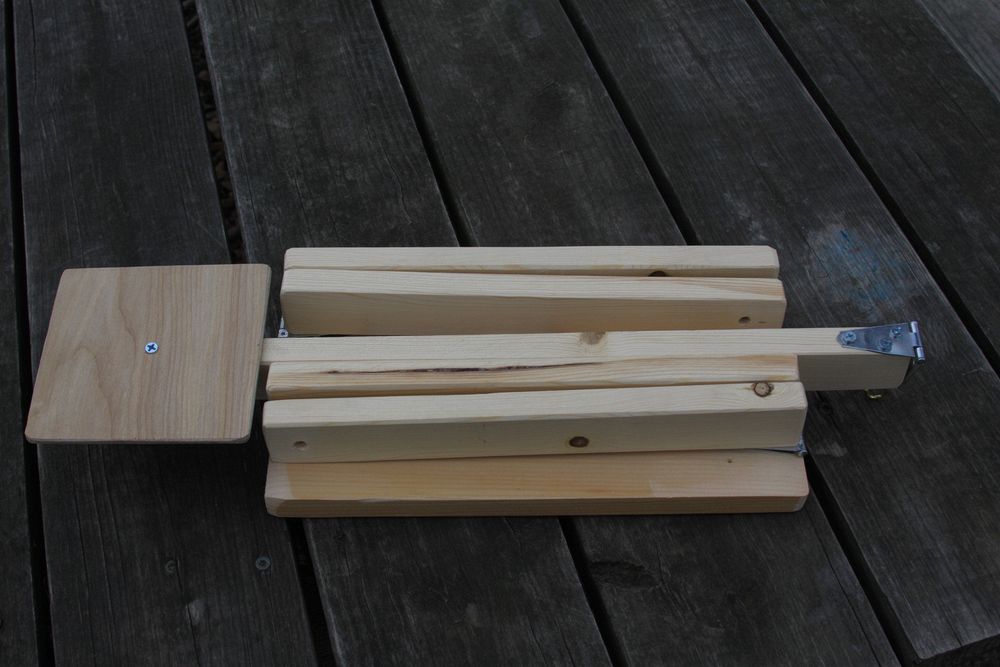 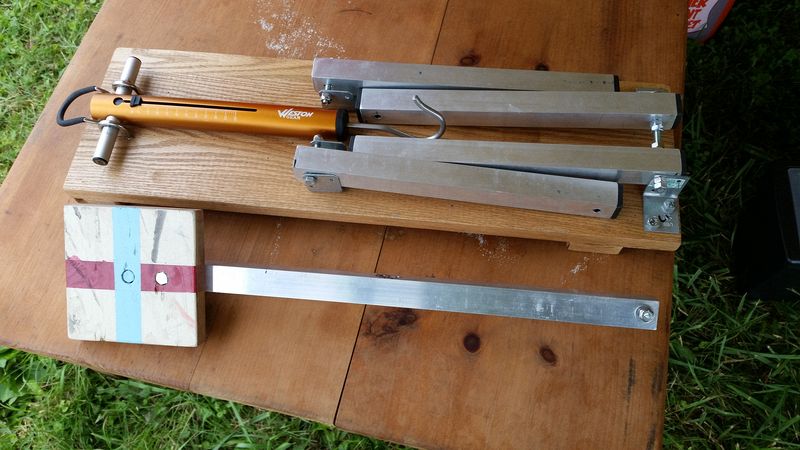 The Mark I and Mark V machines in their folded configurations 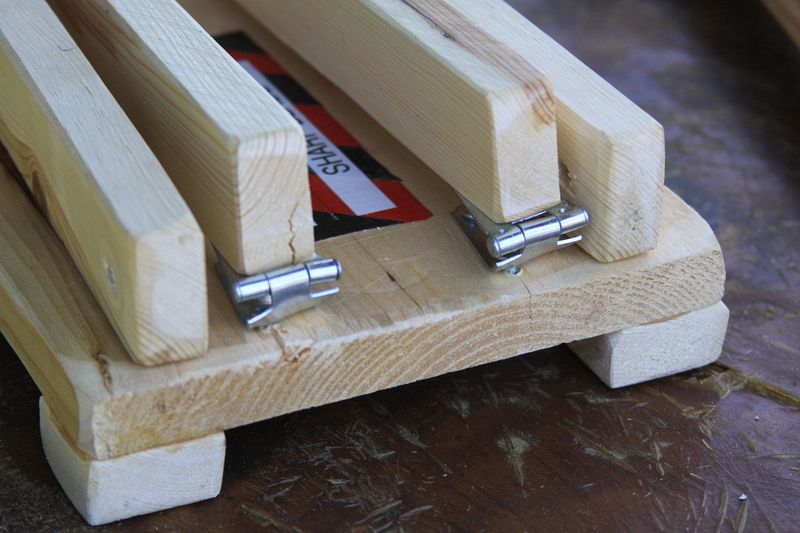 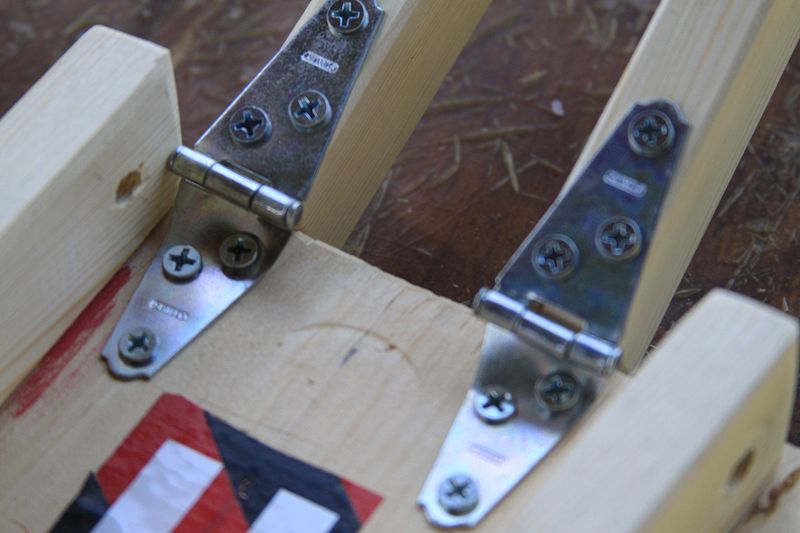 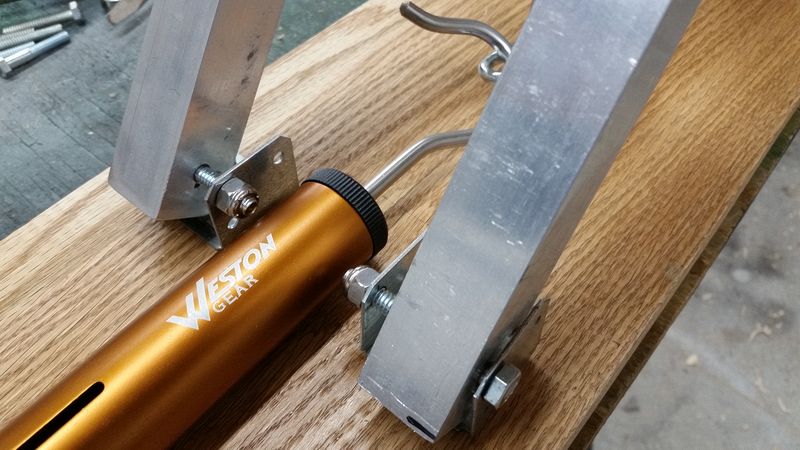 The Mark V's hinges are made from joist hardware purchased at Lowes. The holes had to be slightly enlarged to admit the 1/4" bolts. On the front we used a single bolt that went all the way across and supported both front legs. A threaded carriage bolt was used as the shaft for the hinge and 1/4" nuts were threaded on to position the legs where desired. For the rear hinges, separate assemblies were used for each leg so that the scale could pass between them. Rather than the L shaped mount used on the front, U shaped mounts were used.

I'll be happy to flesh out this section with more details if there are any specific questions. For the time being, here are some close up pictures of various parts of the machine. 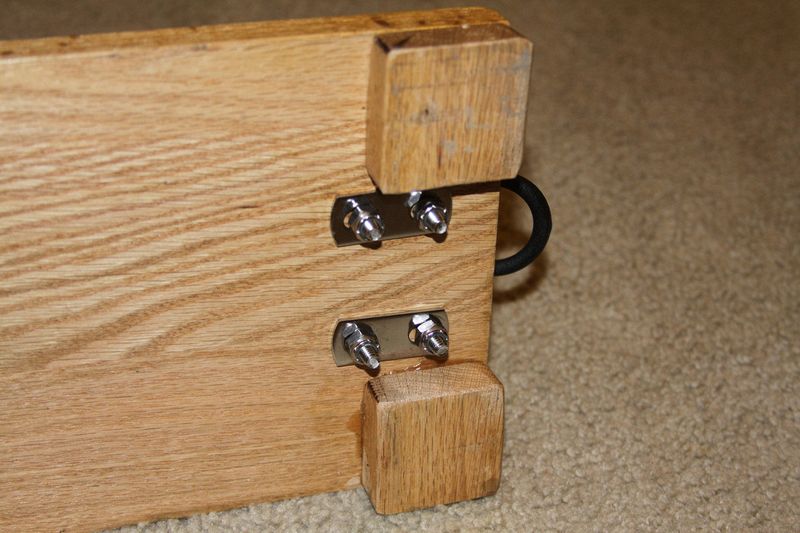 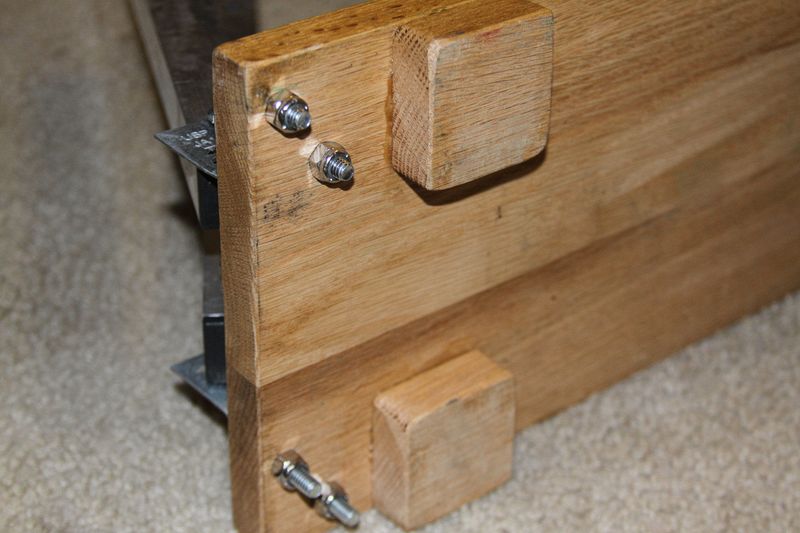 Views of the Mark V machine base. Nuts with nylon locking inserts were used. All hinge supports had 2 bolts that went completely through the oak base. The U-Bolts for the scale came with reinforcement plates that were used. Square feet were cut out of the same wood as the base to both allow space for the bolt ends & nuts and to allow for resting on uneven surfaces. 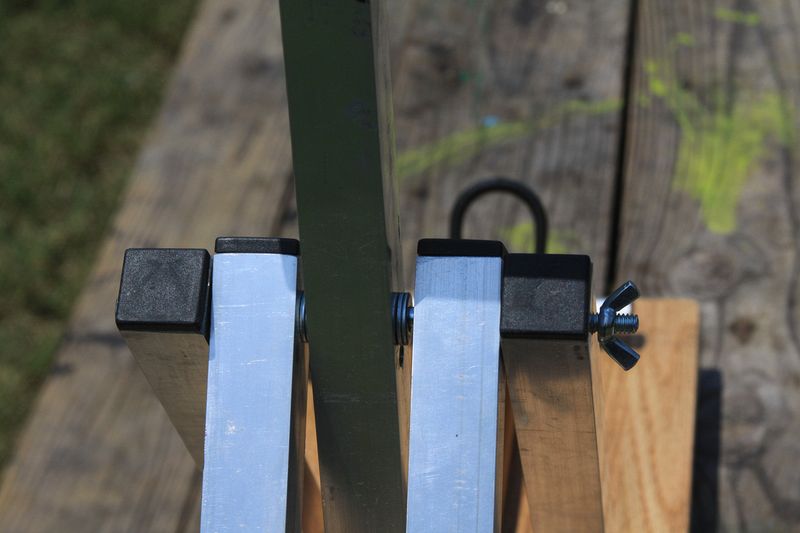 My pivot hinge is a 1/4" diameter, 6" long carriage bolt. I have several washers and a wing nut at the end to adjust spacing and tension.

The hook end of the scale and the eye screw attachment point.